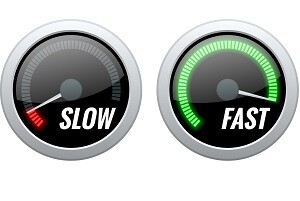 Speed up slow computers and laptops

A parent recently asked us to look at an unbearably slow child’s computer. It was slow to boot, was unresponsive in running games, and was reluctant to close programs when shutting down. The child wanted his games to be more responsive, which needed better computer performance.

The machine was old but was a good quality business machine retasked as a child’s computer. The computer had various games on it and had good quality antivirus. We removed lots of unused software and did some updates, which made some difference. The machine only had 3GB of RAM, so we upgraded it to 6GB which we sourced from an old machine in our parts store. The memory upgrade transformed the computer, which is now quick and responsive. We also defragged the hard drive using a third-party defragger which ran for hours as the fragmentation was very severe.

This story’s moral is that many machines that people usually replace only need some work to revitalize them.

Speed up your slow computer

If you want to improve your machine’s performance, there are several easy things to do first.

If the machine is still not fast enough, then the next steps are to improve the hardware.

What not to do

When searching for help fixing your slow computer or laptop, you will find many sites offering to analyse your computer and solve all your problems. Do not trust these sites unless you are 100% confident they are legitimate, which in our experience, none of them is.

The most common frauds are driver update sites that want you to install their software. The software then tells you, you have dozens of problems they will fix for a fee. This is often dishonest, and you never need to pay for drivers, which are always free from the manufacturer.

There are some sites which try to trick you into installing their “free antivirus”. This “free antivirus” tells you about dozens of viruses on your machine and tricks you into paying for the non-existent service. Some of these are blatant fraud and take your money on false pretences.

Even if you are not being tricked into paying money, you will almost certainly install malware on your PC. Malware might be stealing your identity or doing something else illegal. Unless you are 100% confident about the legitimacy of free software, please do not install it. It is very likely to be installing Malware. Malware is 100% certain to make your slow computer or laptop slower.

Do not become a victim of fraudulent computer software.

To speed up your slow computer or laptop